With a coastline of 1778km and 1185 offshore islands in the Adriatic, Croatia has some of the most beautiful beaches and scenery in the Mediterranean. The stunning Lakes of Plitvice are one of the highlights. It is a great place to explore on foot,  characterized by beautiful falls and little ponds of crystalline water. By comparison, the mountainous areas of mainland Croatia, Paklenica, are less well-known, but a fantastic network of challenging trails and mountain huts awaits.

We spend time in the National Park of Plitvice famous for its spectacular clear waters, rapids, lakes and falls. The Park protects 16 lakes fed by the rivers Bijela Rijeka and Crna Rijeka (White River and Black River), rising underground, connected with several falls, that they pour again in the river Korana; and in the National Park of Paklenica, a mountainous environment covered from dense woods that always serve as frame to the sea and the white rock of the deep gorges. In distance, hundreds of islets, shed in a clear sea. It is hard to imagine a region where you can experience such diverse scenery during a week of walking. The trip finishes in the lovely coastal town of Trogir, where we stay in the fascinating old walled town, not forgetting to visit the beautiful city of Split, with the Domitian Palace. Follow us on Facebook! 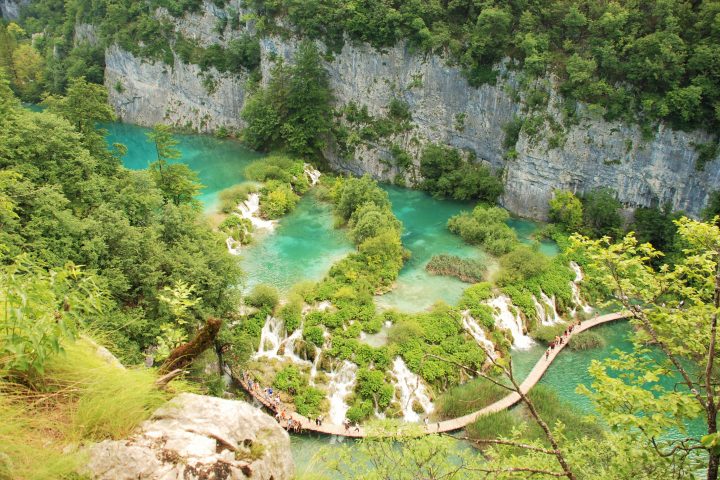 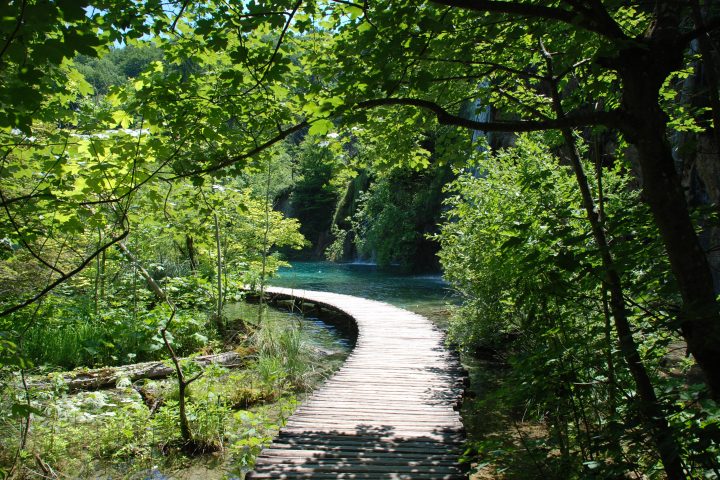 EXCLUSIVE TO THIS HOLIDAY
• Opportunity to visit the colourful villages of Croatia
• Possibility of spotting wild fauna, disappeared in most of Europe
• Famous traditional Croatian fish cooking
• One of the oldest National Park in Croatia, Plitvice
• Natural grottos of Barac
• In Paklenica, alpine environment with high rocky peaks, from where the Adriatic sea is visible
• Visits to the famous Lakes of Plitvice
• Visit the famous, ancient city of Trogir
• Visit the famous, ancient city of Split and the Domitian Palace

DAY 1 – ZADAR-PLITVICE
Arrival and transfer in minibus to Plitvicka Jezera. Arrival in hotel and introduction to the park and the program. Dinner in hotel.

DAY 2 – PLITVICE. SUPERIOR FALLS
After breakfast, we move to the superior falls, along the classical and more known part of the park on the wood gangways predisposed, to observe the geologic particularity of the place. Falls and fresh and clear waters, where it will be possible to admire the tallest fall of the Park. Breakfast in hotel, packed or picnic lunch, dinner in hotel.

DAY 3 – PLITVICE. INFERIOR FALLS
Excursion in the wildest and less crowded part of the Park out of the classical trails: fresh paths in splendid woods of beech tree and maple; along the less known part of the park it will be possible, with a pinch of fortune, to sight the wild fauna that lives in these places. The wolf, up to some a long time ago it was considered a threat while now it is one of the protected kinds that live inside the park. Also the brown bear, symbol of the park, hides in the woods of the Park. In the park also live the wild boar, the lynx, the buck and the fawn.
Breakfast in hotel, packed or picnic lunch, dinner in hotel.

DAY 4 – PLITVICE. BARAC RAKOVICA
Day of relax for the last tour to the park, to visit the beautiful caves of Barac, near the village of Rakovica, where the first government of the newborn Republic of Croazia was initially installed. Breakfast in hotel, packed or picnic lunch, dinner in hotel.

DAY 5 – PLITVICE-PAKLENICA
Transfer in minibus toward the National Park of Paklenica, in the town of Starigrad Paklenica. The National Park of Paklenica is one of the most attractive parks both under the scientific and tourist point of view of the whole north-oriental Mediterranean, rich of natural phenomena and wonders. Among the characteristics we find forests of pine and beech tree, deep canyons, limestone formations and numerous caverns. In the park also live 82 different kinds of butterflies, besides 31 kinds of amphibians and reptiles, 212 types of birds (among which the vultures), 47 kinds of mammals (among which roes, bucks, brown bears, wolves and lynxes). After the arrival, we will take a brief walk of orientation for the roads of Starigrad, and eventually we will visit the alpine educational road MIRILA to complete the day. Breakfast in hotel, free lunch, dinner in hotel.

From Velika Paklenica to the peak of the Crni Vrh mountain and then down in the Bad Paklenica, to return therefore to the point of departure in the zone of Seline. Long deep canyons, vast forests of black pine and beech tree, deep caves and panoramic peaks. Breakfast in hotel, packed or picnic lunch, dinner in hotel.

DAY 7 – VELIKA PAKLENICA. ANICA LUKA. LUGARNICA. SHELTER OF PAKLENICA.
Today our relaxing excursion will bring us along the canyon of Velika Paklenica up to the valley that incude the shelter of Paklenica, to the feet of the mountain villages of Protect and Copper through boundless panoramas and wild valleys.
Breakfast in hotel, packed or picnic lunch, dinner in hotel.

DAY 8 – PAKLENICA-TROGIR
Transfer to Trogir, fishing village considered one of the most beautiful and better preserved Venetian cities of the whole Dalmatia. According to the critic Bernard Berenson few cities in the world enumerate so many works of art in so little space. Our day will be divided between the leisure time to relax to the sea and the visit of the town.
Breakfast in hotel, free lunch, free dinner.

DAY 9 – TROGIR-SPLIT
Transfer for Split and free visit of the city. The capital town of the Dalmatia is really a beautiful town, and not to lose it is the visit of the Palace of Diocletian, that contains to its inside the Baptistery, now Cathedral, the beautiful boundaries with the various gates of entry and the many narrow, fascinating alleys of the city.
Breakfast in hotel, free lunch, dinner in hotel.

Transfer to the airport of SPLIT, departure. After an early breakfast we transfer to Pisa airport – end of services.

One tour per person